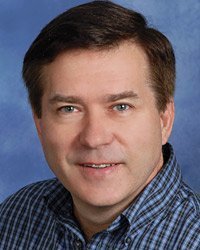 Keith Christopher is actively involved in music as a composer, arranger, orchestrator and producer. His musical roots go back to Wylie, Texas, where he grew up playing trumpet in the band, accompanying in church, and singing in the church youth choir. After high school, he studied music theory and composition and conducting. He holds a Master of Music in Composition from Southern Methodist University where he was a Graduate Assistant in the music theory and choral departments. His composition teachers include Francis W. McBeth, Newell K. Brown, and Simon Sargon.

His music has been performed worldwide by choirs, orchestras, and bands at places including the National Christmas tree lighting, Hollywood Bowl, All-State concerts, and many other symphony and concert halls and festival stages.

Mr. Christopher has received a yearly award for his publications from the American Society of Composers, Authors, and Publishers since 1992. In 1999 he received the famed Gold Record Award for “A Merry Christmas with Brass,” which features The Dallas Brass. In 2003 he received a Dove Award for the choral collection, “More Songs for Praise and Worship.” In addition, he has produced over a thousand recordings for music publishers.