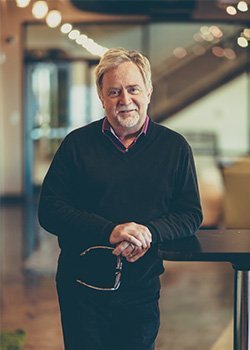 J. Daniel Smith, unquestionably one of America’s premier arranger/producers, has made dynamic contributions to the rise in strength and integrity of the Christian music industry.

J. Daniel’s musical genius is empowered by his surrender and sensitivity to an undeniable anointing. Although an outstanding keyboard artist, he is widely sought after for his versatility as an arranger, producer, and charismatic conductor.

Mr. Smith has served as producer on projects including Matthew Ward, Dennis Jernigan, Geron Davis, Mark Condon, and many others. As a Dove award-winning arranger and orchestrator his choral collections, octavos and seasonal works for major publishers are myriad.

Mr. Smith’s innate ability to mold and inspire Christian artists has served him well in his position as Senior Minister of Music Ministries for the past thirty-one years at Bethesda Community Church in Fort Worth, Texas. There he makes his home with his wife Becky and their two children, Shaylor and Sheridan.