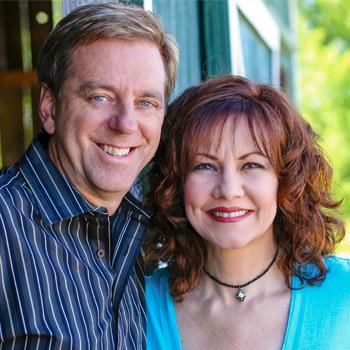 With all followers of Christ, the growth process is a lifetime journey designed to reflect His Light to a dark and dying world. Dick and Melodie Tunney continue to spend their adult life in the process, pressing towards the ultimate goal of reflecting and magnifying Christ’s light to all whose paths they cross from their public platform of ministry.

Their story together begins in the late 1970s in the Christian group, TRUTH. Mel was raised in a minister of music’s home in Texas, and Dick comes from strong family roots in Ohio. Both were accomplished musicians at an early age. The intersection of TRUTH brought the two together and after 18 months of constant touring, Dick responded to a call from the award-winning group, the Imperials. Six months later the couple married and settled in Nashville, TN. The decade of the 1980s found Dick and Mel growing in the areas of songwriting and studio work, and soon they were immersed in Nashville’s creative community. Recording session work quickly engaged Mel with fellow studio singers Bonnie Keen and Marty McCall, and the studio vocal group First Call was born. At the beginning of 1986, Christian artist Sandi Patty called and hired Dick as musical director and pianist, and First Call as her backup group. The “Let There Be Praise Tour” covered 150 cities in 18 months and launched First Call on to a concert ministry of their own while Dick remained on tour with Sandi.

The births of two daughters (Whitney and Kelsey) over a 15-month period of separate touring brought the Tunneys to a crossroads. After several months of prayer and pastoral counsel, Dick and Mel chose to prioritize their marriage and their growing young family by returning home from touring. The season was to be short-lived. Within a year God had other plans for the talented couple. Their first joint recording project, “Let the Dreamers Dream,” was released by Warner Alliance in 1991. Soon the couple found themselves traveling nearly every weekend to local churches across America, sharing a collection of Tunney songs that were designed to encourage, challenge and stretch believers. In total Dick and Mel spent a dozen years traveling to more than 400 churches nationwide.

As their daughters grew into their high school years, the Tunneys once again felt the pull towards family and began to ask God to allow them more time at home. The Father heard the prayer and answered by plugging Dick and Mel into their local church’s worship ministry and by expanding Dick’s studio role as producer/arranger. Mel continued to be a top-notch session singer in Nashville, and Dick found himself recording and conducting esteemed ensembles such as the London Philharmonic Orchestra, The Irish Film Orchestra and the City of Prague Philharmonic.

As 2006 dawned, yet another chapter began to unfold in the lives of the Tunneys. A call from First Baptist Church of Columbia, TN, came inviting Dick and Mel to lead the worship ministry of this growing congregation, first on an interim basis and then as worship leaders/artists in residence. Soon thereafter, Steve Green Ministries invited Dick to tour with the veteran Christian artist as a pianist and musical director. With the flexibility to continue traveling and ministering in local churches as well as the privilege of leading a congregation in worship on a consistent basis, Dick and Mel continued on their journey of faith.

The Tunney’s musical offerings have been honored with 10 Dove Awards (the Gospel Music Association’s highest honor), nearly 30 Dove nominations, a song of theirs won a prestigious Grammy Award (“How Excellent Is Thy Name,” recorded by Larnelle Harris), their songs have appeared in print music and church hymnals and Dick and Mel have shared the platform with some of Christian music’s most significant artists. As well, they have participated in literally hundreds of recording projects as a studio vocalist, keyboard player, arranger(s) and producer. They have recorded 8 projects together, and Dick has (with Mel’s assistance) recorded 5 solo instrumental projects. The couple has penned more than 150 songs, many of which have been recorded by other Christian artists.

As the calendar crested 2010, Dick and Mel have embarked on yet another phase of the journey. Sensing that their work at the First Baptist Church of Columbia, TN, was complete, the couple turned over a very healthy worship ministry to the staff of the church and began a new chapter that includes a continuing of worship leading at conferences and gatherings of parachurch ministries, further travel with Steve Green (Dick), and a renewed emphasis on songwriting with a formalized publishing relationship with Lifeway Worship. Also, Mel has accepted invitations to teach and speak for women’s groups in local churches. This new direction for Mel has been birthed from a desire to speak into the lives of women from God’s Word and is designed to inspire them to go farther and deeper into the Scriptures.

The Tunneys recently celebrated 35 years of marriage, and their family continues to grow. Whitney and her husband, Shawn, reside in Raleigh, NC, where Shawn is associate worship pastor at a wonderful church, and Whitney is a nurse at a UNC hospital in Raleigh. Two little ones, Liam and Lanie, add lots of activity to their daily lives. Kelsey and her husband, Zach, have landed in Cleveland, OH, where Zach serves as youth pastor at a delightful church, and Kelsey serves as the worship leader. Their home has includes 3 little ones — Charis, Siloam, and Elijah.